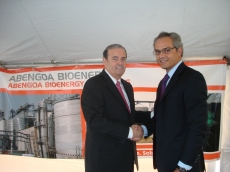 BELLEVILLE – U.S. Congressman Jerry Costello (D-IL) today participated in the grand opening of Abengoa Bioenergy’s new ethanol facility, located in River’s Edge, part of the Tri-City Port District.  Abengoa, which is based in St. Louis, is one of the largest international producers of ethanol and the only ethanol producer with production facilities in the United States, Europe and South America.  The new facility has a production capacity of 90 million gallons of ethanol annually, using 32 million bushels of locally grown corn.

As Costello pointed out at today’s event, the decision by Abengoa to build their newest plant at River’s Edge brought hundreds of construction jobs to build the plant, many local businesses as suppliers of goods and services, and 60 permanent jobs, with the potential to grow in the future.  The Tri-City Port District, previously owned by the federal government and known as the Charles Melvin Price Support Center, was transferred through special legislation, drafted by Costello, from the government in 2002.

“This is a great day for our region and for our nation as we continue to take another step to achieve energy independence while improving our environment,” said Costello.  “River’s Edge is a prime example of the federal and local government working with private businesses to create an environment that supports job growth.  Having Abengoa here is a win for the local economy and a win for farmers in our area.”