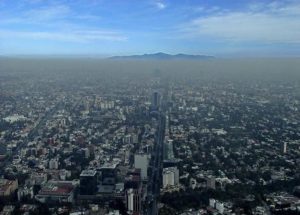 This is a big deal, so read carefully. A significant opportunity to improve the demand picture for your IL Corn in underway in Mexico. Due to the work of the U.S. Grains Council, with support from your IL Corn checkoff dollars and state-level experts, the Mexican fuel market will soon enjoy the opportunity for 10% ethanol. This came about through an intensive effort that was also supported by the ethanol industry.

The air-quality in Mexico’s cities, especially in Mexico City, is alarmingly poor. The area had made gains in air quality over two decades but recently has experienced some backsliding. This is due in part to a growing population, with over 21 million people now there, and bringing with them their automobiles and commutes. One way to offset that additional pollution from the growth in the number of tailpipes is to improve the fuel on the front end. That’s where your corn-based ethanol comes in.

The Mexican Energy Regulatory Commission (CRE) announced recently a change that will increase the maximum amount of ethanol that can be blended in Mexican gas supplies from 5.8 percent to 10 percent, except in the cities of Monterrey, Guadalajara and Mexico City.

The announcement modifies the Mexican Official Standard NOM 016-CRE-2016 regarding the quality specifications for fuels by increasing the maximum volume content of anhydrous ethanol as an oxygenate in regular and premium gasoline in Mexico.

This change comes as part of ongoing energy reforms in Mexico and follows input from stakeholders in the government, private sector, research scientists and social interest groups.

Mexico’s regulators moved in August 2016 to allow ethanol in local fuel supplies, except in its three largest metropolitan areas. In its decision, the CRE recognized the benefits of E10, which will help demonstrate that a 10 percent ethanol blend can positively contribute to air quality improvement and reduced cancer risk throughout the country. The Mexican Institute of Petroleum is also studying the merits of E10 blends.

The decision moves Mexico toward global standards in the use of renewable and sustainable energy resources like ethanol that offer environmental, economic, social and public health advantages over other additives and oxygenates for gasoline.

“We are pleased to see this decision, which is the culmination of significant work by Mexican authorities and industry as they continue to diversify and improve their fuel supplies,” said Tom Sleight, U.S. Grains Council (USGC) President and CEO. “We appreciate the opportunity to work with Mexican leaders as they seek to build their own biofuels industry and offer cleaner fuels for the Mexican people.”

“We’re strongly encouraged by this announcement, which clears the way for further adoption of ethanol into the Mexican fuel supply,” said Growth Energy CEO Emily Skor. “By doing so, Mexican consumers will see how embracing ethanol will reduce harmful emissions, help contribute to a cleaner environment, and will create a stronger rural sector.”

“We are greatly encouraged by Mexico’s recent decision to allow the sale and use of 10 percent ethanol (E10) as part of its fuel market reform efforts,” said Renewable Fuels Association President and CEO Bob Dinneen. “By permitting the use of E10 in its fuel market, Mexico will have blend levels consistent with fuel sold and used throughout the United States and Canada. Not only will Mexico be able to achieve greater octane and oxygenate benefits from using E10, it will help to drive trade and investment in its ethanol fuel sector. We hope the Mexican Institute of Petroleum will soon conclude its study and are confident the study will affirm the air quality benefits of the use of E10 in the country’s most populous cities, thereby allowing it to be used in all regions of the country.”