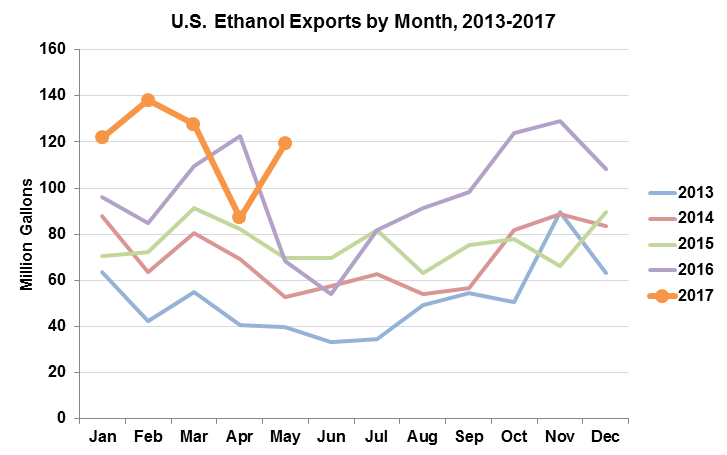 As corn prices remain low, new markets are vital. As far as corn goes, your corn-based ethanol is finding a home in export markets around the world. One of them may be unexpected: Brazil. Brazil has long been a user of high-inclusion-rates of ethanol blends in their nation’s fuel supply. But that ethanol has historically been derived from their own domestic sugar cane crop. As the world sugar price has risen, much of that sugar has gone to the world market for sweetener purposes, rather than fuel. This market shift opens up the Brazilian ethanol market for corn-based ethanol to head south. This report provides more information. It comes from the Renewable Fuels Association blog:

U.S. ethanol exports surged to 119.2 million gallons (mg) in May, up 37% from April shipments, according to government data released this morning and analyzed by the Renewable Fuels Association (RFA). The total represented a new record for the month of May and was 75% higher than year-ago shipments. Brazil and Canada were again the top destinations for U.S. exports, combining to receive 80% of total exports in May. Brazil imported 64.3 mg in May, while Canada took in 31.3 mg of U.S. ethanol. Year-to-date U.S. ethanol exports stood at 594 mg through May, indicating an annualized export total of 1.43 billion gallons.

As for denatured fuel ethanol exports, May shipments tallied at 34.0 mg, up some 44% from April. Canada was the top customer at 30.5 mg, while Peru (2.3 mg) and Brazil (1.0 mg) were the only other countries to import meaningful volumes.

Exports of denatured and undenatured ethanol for non-fuel, non-beverage purposes totaled 3.2 mg. The Philippines and Canada together accounted for 75% of this volume.

NOTE: This post will be updated on the RFA web site’s E-Blog to include data on May U.S. ethanol imports once that data becomes available.