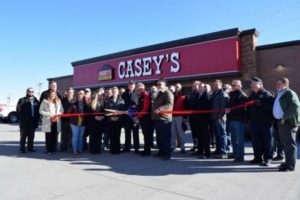 MONMOUTH — The ribbon-cutting for Casey’s third Monmouth location, and first Monmouth “super-store,” was underscored by talk of the impact of the store’s ethanol pumps on the surrounding agriculture community. The ribbon-cutting, which took place two weeks after Casey’s “soft” opening, was attended by various members of city government, area politicians, and members of Big River Resources, an agricultural company based in Burlington, Iowa, among other community members.

The Monmouth store has marked significance as it is the first Casey’s store to include an E-85 pump, which pumps 85 percent ethanol and 15 percent gasoline. The Casey’s also includes an E-15 pump, which has the reverse ratio of gas to ethanol. The ethanol addition is seen as not only a benefit for the environment in terms of clean energy, but also one for the agricultural landscape surrounding Monmouth, as farmers will have an additional outlet to which they can sell a major cash crop: corn.

“I really appreciate Caseys continuing to invest in Monmouth,” Mayor Rod Davies said. “It’s their third store here. It’s their first store in the chain with an E-85 pump. It’s very important to us to have

another outlet for agricultural products.”

Kim Lippert, manager of 55 Casey’s locations in the area, said she was “super excited to be here and to be a part of this in our company.”

Big River Resources CEO Ray Defenbaugh said the inclusion of the ethanol pumps comes at a vital time for area farmers, who he says are seeing lower and lower profits.

“I’m pretty sure Casey’s was one of the first dealers to offer ethanol,” Defenbaugh said. “That shows support for the rural community and I hope everyone will support them. The agricultural community right now is not in the best shape as far as prices go and income. … This is a very exciting thing and it opens the door to a good future.”

State Rep. Randy Frese, R-Paloma, talked about the importance of job creation, which is aided by the addition of the store.

“You guys are the job creators … we thank you for that,” Frese said. “We need all the jobs we can get.”