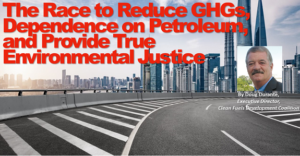 Reducing greenhouse gases, decarbonizing our transportation fuels, providing environmental justice—all laudable objectives, but in the face of political, financial, and practical obstacles, can we realistically expect meaningful results in the short or even mid term? We can if we put egos aside and for some stakeholders, show some willingness to look beyond single source solutions.

It is becoming increasingly clear that electrifying the U.S. vehicle fleet is going to take time. While automakers have responded positively to the call for EVs and pledged to aggressively convert all or portions of their vehicles to electric, it is a monumental task. With 270 million light duty vehicles registered in the U.S., less than 2% are electric. Without a doubt they are trending upwards and will begin to penetrate the market in greater numbers. But, that depends on funding, advances in battery technology, government subsidies for re-charging and tax incentives, sustainably sourcing rare earth minerals, and consumers willing to purchase such vehicles.

Even the most optimistic scenarios for EV growth make it clear we will continue to rely on internal combustion engines operating on gasoline. How much gasoline? Hundreds of billions of gallons over the next decade while electric vehicles and the supporting infrastructure is developed. Therefore, an honest and realistic assessment of the situation indicates if we want to get to work right away reducing ghgs and protecting public health, gasoline is where we need to focus, and renewable biofuels such as ethanol can and must play a key role. The Renewable Fuel Standard (RFS) has met its intended objective of stimulating domestic production of ethanol, with roughly 17 billion gallons of high octane low carbon ethanol capacity here in the U.S. So how do we put that ethanol to best use?

The answer lies in potentially game changing legislation that has been a bit obscured by the constant battles that surround the RFS. The Next Generation Fuels Act has been introduced by Representative Cheri Bustos (D-IL) and is the most comprehensive, connect-the dots, transformational fuels legislation seen since the Clean Air Act Amendments of 1990. It recognizes vehicles and fuels must be viewed as an integrated system and tackles some of the most elusive issues automakers and fuel providers have been grappling with for years. If enacted it could provide those near-term benefits of reducing carbon, increasing vehicle efficiency, reducing toxic emissions, and protecting public health.

Octane & Carbon
The first step in the process is the bill’s call for an increase in octane. Current low octane gasoline handcuffs automakers as to the efficiency they can squeeze out of an engine. Increasing octane to the 98 Research octane number the legislation would eventually require could provide as much as a 7%-8% increase in efficiency. 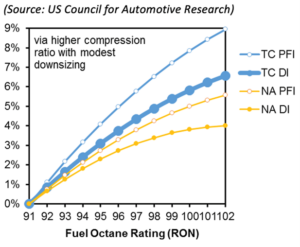 Speaking of carbon, the bill embraces the critical need to reduce carbon and would require octane sources in the new fuels to result in at least 40% fewer greenhouse gas emissions than current gasoline. These are reductions that can be achieved immediately with High Octane Low Carbon ethanol blends of 20-30%. Recent updates to the Department of Energy’s Greenhouse Gas and Regulated Emissions, and Energy Use in Transportation (GREET) Model, the gold standard in assessing carbon emissions, concluded corn ethanol achieves a 45% reduction level. When calculating the additional reductions by replacing aromatic compounds currently used to increase octane, our modeling through CFDC and the Urban Air Initiative shows more than 50%.

And what about those aromatics? Former Environmental and Energy Study Institute Director Carol Werner has called these toxic, carcinogenic compounds used to increase octane “The New Lead”. Regulated as Mobile Source Air Toxics, almost all are benzene derived, with benzene being classified as a known carcinogen that the American Petroleum Institute once acknowledged had a safe threshold of zero! We have over time replaced lead with toxic aromatics, effectively trading one health hazard for another. Inner city and urban residents bear the brunt of vehicular particulate emissions with respiratory and even neurological illness far exceeding other areas, hence the call for environmental justice. This legislation would require a phased in reduction in aromatics from what is essentially an uncapped volume, with levels as high as 45%, to an average of 17%.

Where are The Autos?
So, we have designed a true fuel for the next generation—it is required to be high octane, low carbon, cleaner, and would be a domestic economic stimulant. But what about vehicles? What say they? Would they like such a fuel? The Alliance for Automotive Innovation, representing 38 companies producing 98 percent of the light duty vehicles sold in the United States, stated:
“Gasoline will continue to play a vital role in transportation for years to come. The use of high octane low carbon liquid fuels would simultaneously support vehicle performance, including fuel economy, and further reduce greenhouse gas emissions. Such benefits would be realized by new and existing internal combustion engines and therefore should be encouraged as additional solutions as soon as possible to maximize environmental benefits across the fleet.”

This legislation would ensure new vehicles are optimized for higher octane and warranted to provide for a smooth transition. It would require automakers to begin as soon as model year 2026 to warrant blends of up to 25% and later to 30%. All new vehicles would be certified on a minimum octane fuel of 95 RON (Research Octane Number) and a 20% ethanol blend, eventually increasing to 25-30%. All other related issues ranging from misfueling to harmonizing various regulations are addressed in the bill.

With two significant rulemakings likely for 2022, the Bustos package of fuel and auto improvements is timely in a number of ways. First, the recent adoption of the Biden Administration’s GHG and fuel economy rule sets GHG and efficiency standards only through 2026. A second phase addressing longer term requirements is already being framed out. The reduction in carbon emissions and increase in efficiency in a new, post 2026 rule can begin to be achieved with the millions of gasoline powered cars that will still be sold, as well as with cars in the existing fleet, regardless of EV market penetration. A balance of conventional internal combustion engines powered by this new and cleaner fuel, along with gradual integration of electric vehicles would result in significant efficiency gains.

The second rulemaking EPA has stated they intend to develop is to tackle fine particulate matter, or PM. Measured in microns, PM 10 and pm 2.5 have been recognized by Congress and EPA as serious health hazards. Various rules have addressed some PM in transportation, notably sulfur in diesel fuel. However, fine and ultra-fine particulates smaller than 2.5 are now known to correlate to gasoline. A recent study by General Motors found that 96% of the PM emissions in gasoline are caused by aromatics in the fuel. EPA has acknowledged their models do not accurately account for these microscopic particulates and this clear and present danger has been ignored. A rulemaking by EPA could be supported and augmented though passage of the Next Generation Fuels Act.

The willingness to look beyond a silver bullet solution noted in the opening of this article pertains to many who are so enamored with the prospect of EVs that they refuse to address the realities. The objective is to reduce carbon—not eliminate the internal combustion engine.

If those engines can reduce carbon, why wouldn’t we do everything we can to help position them to do so? It is a false choice to have to pick either EVs or do nothing. Reducing petroleum consumption in the U.S. by 50% would be an extraordinary, incredible, monumental success. But that would still leave a gasoline pool of more than 50 billion gallons annually. The head of the California Air Resources Board, even with their aggressive EV targets, stated in early December that biofuels will have an important role to play for years to come. Similarly, the Executive Director of the Sacramento Air Quality District has stated the transition away from fossil fuels will take time and has said we need to minimize the impact of combusted fuels.

So there you have it—the questions posed at the beginning of this article asked where will the reductions in GHG and petroleum come from in the short term. The answer is a new, cleaner, liquid transportation fuel that the Next Generation Fuel Act will create. It provides immediate, significant, and tangible benefits to the environment, public health, the economy, energy security, and American agriculture. There is no cost to the Government or taxpayers and is supported by many in the auto, refining, and ethanol industries. Rarely does one find this kind of consensus.

Now we hope policy makers and the health and environmental communities can look with fresh eyes at this important issue that can help our quest to substantially reduce carbon in the near term, as well as other harmful pollutants, to address our climate emergency.