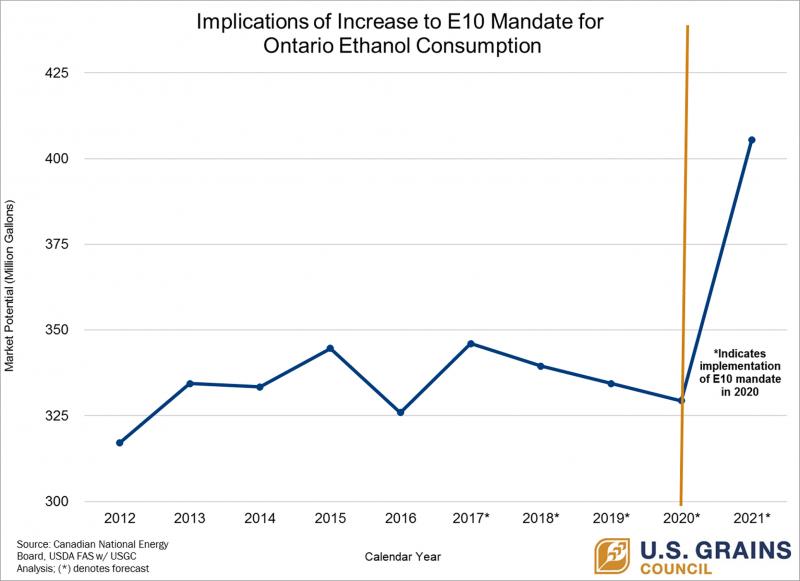 Canada currently has a national five percent ethanol mandate and is also reviewing policy, on the federal level, related to renewable fuels in terms of reducing GHG emissions. Across Canada, various provincial mandates – like the one proposed in Ontario – can require higher blending rates beyond the federal mandate. Ontario has over-blended its five percent ethanol mandate ranging from seven to eight percent between 2012 to 2017, based on the societal and economic advantages of blending ethanol.

Ontario represents roughly 38 percent of total gasoline use in Canada, making the province a major transportation hub. The doubling of the mandate reflects the potential for increased overall ethanol demand across Canada.

“Globally, countries are increasingly looking to ethanol as they seek to meet their Paris Agreement commitments as well as individual country objectives to reduce GHG emissions,” Sleight said. “The proposed doubling of the blending rate in Ontario, is another example of the opportunity for greater blends of ethanol to help achieve these objectives.”

The proposed mandate would also provide additional advantages from increased ethanol use beyond the GHG emissions reductions, including the associated health benefits of improved air quality and the economic benefits of ethanol as a cost competitive source of octane.

The Council jointly filed comments with Growth Energy to the government in Ontario in March 2017 to support the use of ethanol as the best and most cost-effective way to reduce GHG emissions associated with gasoline. A comment period on the proposed mandate in Ontario is now open in addition to discussions on how to move forward on the level.

via US Grains Council